Blog Dare Day 15 - Why I don't like a certain cartoon character...

Cartoons can be a lot of fun.  I loved watching Scooby Doo when I was a kid, as well as the Flintstones! On Saturday morning, my brother and I would watch the Bugs Bunny and Roadrunner Show.  Those were the days!   They do not make cartoons like that anymore.  I watched in horror one day when on an episode of Spongebob they discussed farting.  Yes, I realize that passing gas is a natural bodily function, but I would prefer hearing it called something other that a fart.  That is just a pet peeve of mine.  That was the beginning of my dislike of Spongebob. 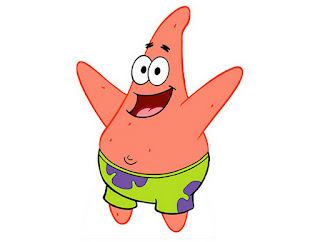 I do not like the fact that Spongebob is so dumb.  He has an annoying voice and laugh too.  I do not care for money hungry Mr Krabbs, who has a spoiled brat of a whale daughter Pearl.  Squidward is a grump, and although I do like Sandy, she is a know-it-all.  The character I like least on the show is Patrick, because they made him just too dumb.  Funny is nice, but when it gets downright stupid, leave me out.  My hubby enjoys watching Spongebob...maybe I'm just getting old!

What are your thoughts?  Is there a cartoon character that you dislike?