Where "Margaret" Got Its' Title 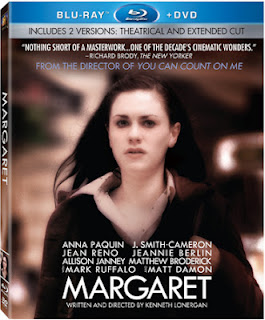 Twentieth Century Fox Home Entertainment will release of Margaret to Blu-ray/DVD combo pack on July 10. The title Margaret is not for a character in the film, but it's featured in the poem "Spring and Fall" recited in the movie. It has more meaning than perhaps the first-time viewer would catch.

Here is the poem for you:

Here is a Synopsis:
From Academy Award® nominated* writer/director Kenneth Lonergan (You Can Count On Me) comes a stirring drama Rolling Stone calls "a film of rare beauty and shocking gravity." Anna Paquin, Matt Damon and Mark Ruffalo lead a celebrated cast in the story of a Manhattan teenager whose life is profoundly altered after witnessing a terrible accident. Experience an emotional teen's extraordinary journey to set things right as her innocent ideals come crashing against the harsh realities of the adult world.

Disclosure:  I received all the photos and information from Twentieth Century Fox Home Entertainment through Think Jam.  I was not monetarily compensated, but I will be sent a screener copy of the movie to review.
By Shelly Leatham at July 06, 2012