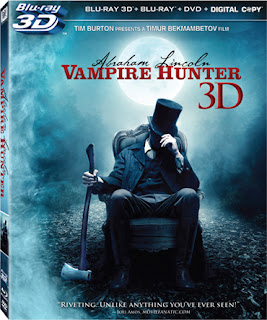 The election season is about to get a whole lot bloodier as historical legend throws his hat into the ring in ABRAHAM LINCOLN: VAMPIRE HUNTER, arriving on Blu-ray™3D, Blu-ray™ and DVD October 23 from Twentieth Century Fox Home Entertainment. A citizen by day and a hunter by night, this action-packed film with cutting-edge visual effects shows the Lincoln you know – with one additional quality of which you were unaware... until now.

ABRAHAM LINCOLN: VAMPIRE HUNTER explores the secret life of Abraham Lincoln before he became President, and the untold story that shaped our nation. Visionary filmmakers Tim Burton (Dark Shadows) and Timur Bekmambetov (Wanted) bring a fresh and visceral voice to the bloodthirsty lore of the vampire, imagining Lincoln as history's greatest hunter of the undead.

Based on the New York Times Best Seller novel by Seth Grahame-Smith, ABRAHAM LINCOLN: VAMPIRE HUNTER stars Benjamin Walker (Flags of Our Fathers), Dominic Cooper (Captain American: The Frist Avenger), Anthony Mackie (The Adjustment Bureau), Mary Elizabeth Winstead (Scott Pilgrim vs. The World) and Rufus Sewell (The Tourist). The Blu-ray™ 3D and Blu-ray™ are loaded with killer content and hard action, including an exclusive never-before-scene animated graphic novel prequel about the origins of vampires in the U.S.A. Prebook is September 12. 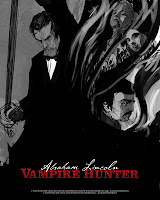 Disclosure:  I received this information and wanted to pass it on! No compensation of any type was received!
By Shelly Leatham at October 14, 2012