Tom and Jerry DVD and Pump It Up Review and Giveaway

On the heels of the release of the new direct to DVD movie, Tom and Jerry: Robin Hood and his
Merry Mouse, Pump It Up, national leader in the children’s entertainment category, is hosting a national
sweepstakes. 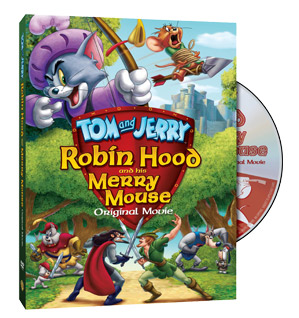 Tom and Jerry: Robin Hood and his Merry Mouse, set for release on October 2, 2012, is an animated, action packed family film where Tom joins forces with Jerry to rescue their respective humans from evil villains.

“As a leader in the children’s entertainment category, we always look for opportunities in popular culture to
engage our fan base,” said Lee Knowlton, CEO for Pump It Up. “The Tom and Jerry: Robin Hood and his
Merry Mouse Blu-ray is a fun, upbeat film for families. It fits well with our brand.”   Pump It Up’s Pop-In Playtime is a fun destination for kids to play and is designed to encourage social and active behavior through exercising through their bodies and imaginations. Kids and parents are invited to visit their local Pump It Up location to jump, bounce, slide and climb around in the in a fun, safe, indoor environment.  With the Pop-In Playtime punch card program, families who come to play four times will receive their fifth visit free.

About Pump It Up
A clear, national leader in the children’s entertainment category, Pump It Up is a 150-unit franchise specializing in private birthday parties and programs like field trips, camps, open jump time, pop-in playtime and other seasonal special events. Known by most parents as their “kids’ favorite place,” Pump It Up prides itself on offering a trained, safety-oriented staff committed to serving families in a fun stress-free environment. For more information about Tempe, AZ- based, Pump It Up, please visit www.PumpItUpParty.com.

If you are Tom and Jerry fans, you will love this adorable DVD!  We were already Tom and Jerry fans, and this movie just pulled us in!  It is a wonderful movie that the entire family can enjoy.   Along with the DVD, we received 2 free passes to Pump It Up.  We visited the Raleigh, NC location of Pump It Up, and the kids really enjoyed themselves!  The location was busy, but the kids did not seem to mind at all!

WIN IT! One lucky Shelly's Bits and Pieces reader will Win  (1) standard definition DVD of Tom and Jerry: Robin Hood and his Merry Mouse (approx. retail value $19.98) and two (2) free passes for Pop-In Playtime at any Pump It Up location.

Disclosure:  We received the DVD along with the tickets to facilitate the review.  No monetary compensation was received!  All opinions are those of the Shelly's Bits and Pieces family!
By Shelly Leatham at October 20, 2012

the St. Charles, MO location is 10 miles from my house..Huge Tom and Jerry fans.

we have one 25 miles away in Brentwood, TN.