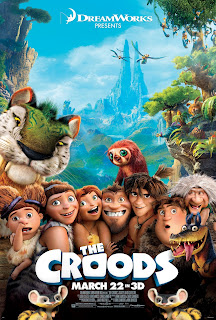 My family is so excited about the new movie from Dreamworks Animation that is hitting theaters on March 22....The Croods!!!  We have already purchased out tickets and are planning a movie/pizza night! Want to learn more?

THE CROODS is a 3D comedy adventure that follows the world's first modern family through the journey of a lifetime. When the cave that has always been their home is destroyed – with
the rest of their world not far behind it – The Croods are forced to set off on the first family road (or path) trip. Rocked by generational clashes and seismic shifts, The Croods discover an incredible new world filled with fantastic creatures, and a future beyond any they imagined.

The Crood family dynamics, though unfolding a few million years ago, feel like they could come from your own household.  Like most fathers, family patriarch Grug (Nicolas Cage) is fiercely protective of his wife and three kids. His hyper-vigilance has kept his cave-bound family safe, secure and....super-bored.  Grug’s strong and dutiful better half, Ugga (Catherine Keener), accepts her husband's "fear is good; change is bad" mentality, as does their son Thunk (Clark Duke), who’s content with the static status quo.  Feisty mother-in-law Gran (Cloris Leachman) never tires of needling (or sometimes assaulting) Grug; and stone-tough toddler Sandy might be the fiercest Crood yet.  But leave it to a rebellious teenager (is there any other kind?) to stand up to parental authority.  Grug's sole focus is survival, but Eep (Emma Stone) wants to
actually live, and her curiosity about the world outside their cave collides with her dad's primitive
rules.  (Ever the defiant outsider, Eep gets her own ledge to sleep on while the rest of the Croods form a “sleep pile” for some group shut-eye.)  A cataclysmic event forces the Croods to venture into parts unknown and rethink their way of living.  En route, they encounter Guy (Ryan Reynolds), whose dazzling new discoveries – like fire...and shoes – shake up the Croods in unexpected ways. Most of the family (especially Eep) is smitten by Guy’s vision of a new place called “tomorrow,” but Grug sees the biggest calamity yet: a charming teenage boy from which he must “protect” Eep.  The Croods soon realize that if they don’t evolve...they’re history.


Want a chance to win some Croods goodies of your own?  One lucky Shelly's Bits and Pieces reader will win an awesome poster (seen at top of post) and a Belt plush toy.
Simply enter on the rafflecopter form below and a winner will be chosen from all verified entries!

a Rafflecopter giveaway
Disclosure:  I received related products in compensation for this post. All opinions are my own!
By Shelly Leatham at March 20, 2013

I hope to see it in the theaters.

Not sure, probably waiting for it to come to DVD

My boyfriend has a daughter who has been saying "DUN DUN DUUUUUUN" for weeks now, so we'll probably see it in the theater.

We will probably take the kids to go see it

I usually wait but my grandsons really want to see this so I think we may go to the theater to see it.

i want to go to the movies, carawling(at)hotmail(dot)com

I am hoping to take my oldest to see it soon!

I would like to get to the theatre but not sure.

I would love to see it in the theater but will probably buy it on DVD instead when it comes out.

I am going to see it in the theater