Disclosure: No compensation of any kind was received! Just wanted to pass on the information because we liked the movie! 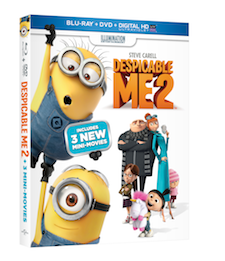 On December 10th, Universal Studios Home Entertainment will release DESPICABLE ME 2, the $863 million worldwide box office phenomenon and the year's #1 comedy, on Blu-ray™ and Blu-ray 3D™ Combo Packs, DVD and Digital HD including UltraViolet™! Bonus features include three all-new mini-movies featuring the mischievous but lovable Minions, deleted scenes, a closer look at the evil minions and
much more!