Disclosure:  I am a non compensated promoter of this campaign!  All opinions stated are honest and are those of the Shelly's Bits & Pieces family!  Movie information and prize provided by Warner Bros. via PartnersHub.

Back during the summer my hubby and I planned to go see Pacific Rim.  The movie looked a little too Sci-Fi for me, but it was perfect for Chefy!  We had our date night planned out, then I got sick and went in the hospital!  So much for best laid plans!   We are excited to have that movie night when Pacific Rim is released on DVD and Blu-ray on Oct. 15th! 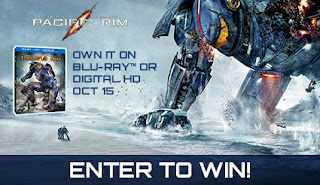 Go BIG or go EXTINCT!
Directed by Guillermo del Toro, Pacific Rim is an epic science fiction film set in the 2020s. Earth is at war with Kaijus; colossal monsters from an inter-dimensional gateway on the Pacific Ocean floor. Humanity unites to fight these huge monsters by creating the Jaegers: gigantic humanoid robots that are controlled by two pilots whose minds and memories are linked. The story takes place in the later days of the war, following Raleigh Becket, a former Jaeger pilot called out of retirement and paired up with newbie pilot Mako Mori in a final effort to defeat the Kaijus!


You can check out the App below and get a feel for the movie!  After checking out the app, feel free to enter the giveaway, via rafflecopter, for a chance to win your own Blu-ray copy of Pacific Rim!

Pacific Rim: CONTROLLABLE GIFs - Move & click your mouse across the GIFs to control the Giant Kaiju and Massive Jaegers!
Pacific Rim SUPERFAN QUIZ - How do your movie smarts stack up? Do you consider yourself to be a movie superfan? Take the quiz to find out!
Pacific Rim SOUNDBOARD - Pacific Rim features epic battles between the Jaegers and Kaiju! Play with SFX from the movie, create your own battle clashes, and save mankind from the apocalypse!

Please Remember:  The prize is shipped by company, we are not responsible for movie or shipping.  No PO Boxes! Each household is only eligible to win 1 Pacific Rim Blu-Ray via blog reviews and giveaways. Only one entrant per mailing address per giveaway. If you have won the same prize on another blog, you will not be eligible to win it again. Winner is subject eligibility verification.   This is sponsored by Warner Bros via PartnersHub!
By Shelly Leatham at October 12, 2013

I am a Fantastic Fan !

I am a fan in training!

I didn't do great at all with the quiz, I'm a FAN-IN-TRAINING!

I'm only a Freshman Fan - regnod(at)yahoo(d0t)com

CONGRATULATIONS! YOU’RE A
FANTASTIC FAN! :) I saw it twice.