Percy Jackson: Sea of Monsters Coming on Dec.17 to Blu-ray,3D Blu-ray and DVD

Disclosure: No compensation of any kind was received for this post. I just wanted to share!
Percy Jackson: Sea of Monsters 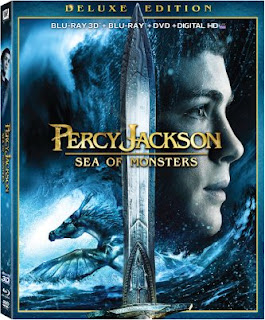 Join the Quest of a Lifetime, Packed with an All-New Motion Comic and Collectible Cards, on 3D Blu-ray Deluxe Edition, DVD and Blu-ray December 17 and Digital HD™ December 3.

The magical, mythical adventures of teenager Percy Jackson — son of the Greek god Poseidon — continue in this heroic, action-packed thrill ride! Out to prove he’s not just a “one-quest wonder,” Percy and his demigod friends embark on an epic, cross-country journey into the treacherous Sea of Monsters, where they battle terrifying creatures, an army of zombies, and the ultimate evil. With time running out, Percy must find and bring home the fabled Golden Fleece, which has the power to save his world...and save us all!
By Shelly Leatham at October 10, 2013