Disclosure:  No compensation of any kind was received for this post!  Just passing on the information to my readers! 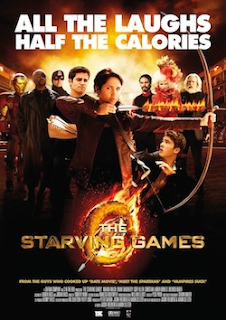 If you and your family love The Hunger Games be sure to check out The Starving Games starring Maiara Walsh (“Switched at Birth”), Cody Allen Christian (“Surrogates,” “Pretty Little Liars,”) and Brant Daugherty (“Dancing with the Stars,” “Pretty Little Liars,” “Days of Our Lives”) over the Thanksgiving weekend! The Starving Games is currently available on VOD and Digital Download.

Set in the most depressing corner of a post-apocalyptic future, our hero Kantmiss Evershot (Maiara Walsh) volunteers to take her manipulative younger sister’s place in the 75th annual “Starving Games.” In doing so, she must leave behind her smoldering just-a-friend Dale (Brant Daugherty) and team up with the geeky baker’s son Peter Malarkey (Cody Allen Christian) in a fight for her life. But wait, there’s more! She could also win an old ham, a coupon for a footlong sub at a six-inch price, and a partially-eaten pickle!

In The Starving Games, Friedberg and Seltzer’s sixth cinematic spoof of popular box-office hits, the prolific parody duo has its sights trained on the adventure blockbuster The Hunger Games! It’s all the laughs and half the calories as they sling dozens of cock-eyed, barbed arrows at sci-fi, action and fantasy films from The Avengers and Oz the Great and Powerful to pop culture characters and celebrities like Harry Potter and Taylor Swift.

The Starving Games stars Maiara Walsh (“Switched at Birth”) as Kantmiss Evershot, the eagle-eyed archer whose bravery and skills inspire the masses along with trending topics on Twitter®; Cody Allen Christian (“Surrogates,” “Pretty Little Liars,”) as Peter Malarkey, the geeky young man who volunteers alongside Kantmiss; Brant Daugherty (“Dancing with the Stars,” “Pretty Little Liars,” “Days of Our Lives”) as Dale, Kantmiss’s beau who’s left behind to watch – and simmer; Ross Wyngaarden (“Bonnie & Clyde: Justified”) as Marco, a ruthless player handy with a blade; Dean West (“Monster Hunters”) as Seleca, the game’s controller and Diedrich Bader (Vampires Suck, Meet the Spartans) as President Snowballs, the malevolent, but ratings-conscious ruler. The comedy is directed by Jason Friedberg and Aaron Seltzer (Meet the Spartans, Vampires Suck) and is produced by Peter Safran (The Conjuring, Vampires Suck.)
Rated PG-13 for crude and sexual content, comic violence, language and partial nudity.