Disclosure: We received a DVD to facilitate our honest review. All opinions are those of the Shelly's Bits & Pieces family. Information in bold blue was provided by sponsor. Please note that the sponsor is responsible for prize fulfillment. 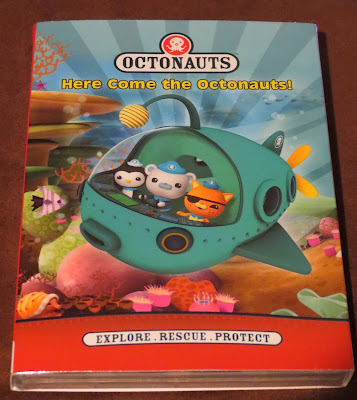 Dive into the New Year and into adventure with everyone’s favorite underwater explorers, the International EMMY-nominated Octonauts, and join them on their mission to “explore, rescue and protect!” Here Come the Octonauts is available for the FIRST time on DVD on January 7, 2014, from NCircle Entertainment—available at Walmart and many other retailers and grocery stores nationwide!

CAPTAIN BARNACLES BEAR - A brave polar bear extraordinaire and the leader of the Octonauts crew. He's always the first to rush in and help whenever there's a problem.

KWAZII KITTEN - A daredevil orange kitten with a mysterious pirate past. He loves excitement and travelling to exotic places.

PESO PENGUIN - The medic for the team. He's an expert at bandaging and always carries his medical kit with him in case of emergencies. He's not too fond of scary things, but if a creature is hurt or in danger, he can be the bravest Octonaut of all!

Together with the rest of their crew, DASHI (SAUCI) DOG, SHELLINGTON SEA OTTER, TWEAK BUNNY, PROFFESSOR INKLING OCTOPUS and TURNIP THE VEGIMAL, the Octonauts explore the world's oceans, rescue the creatures who live there, and protect their habitats - above and below the waves!

In Here Come the Octonauts, Captain Barnacles must figure out how to free an old friend who is trapped beneath the ice; Kwazii tries to rescue a reef full of creatures before an undersea storm strikes; and Peso must help a school of frightened fish who have invaded the Octopod!

Based on the books of the same name by Vicki Wong and Michael Murphy, who write under the name Meomi, Octonauts is broadcast weekday mornings on Disney Channel’s Disney Junior block. The Octonauts received a BAFTA nomination for Best Animated Preschool Show in 2011 and 2013; and in October 2012 was nominated for an International EMMY Award

The girls loved the Octonauts!  The episodes are short enough that Pistol actually pays attention to the whole thing.  As a matter of fact, she watched the entire DVD without losing interest.  Princess Pickle enjoyed it too!  The girls love the fact that it is underwater!  Those two love the ocean and are always interested in the creatures who live there!  I love the fact that they were learning something while watching the DVD.  I must admit, I was learning too!  I would highly recommend Here Comes the Octonauts to anyone with young children!  It jumped quickly into one of our most watched DVD spots!

Would you like to win a copy of the Here Comes The Octonauts DVD for your family?  Simply enter on the rafflecopter form below and you could win!  It is as simple as that!


a Rafflecopter giveaway
By Shelly Leatham at December 28, 2013

My two boys since they LOVE this show.

My great nephew Dylan that I watch, He loves the Octonauts. It was the theme of his 3rd Birthday party. We watch it everyday.

I would love to get We're the Millers on blu ray

i would give it to my niece

this would be for my kids