Winnie the Pooh: Springtime with Roo on Blu-ray and Digital Hi-Def coming 3/11/14 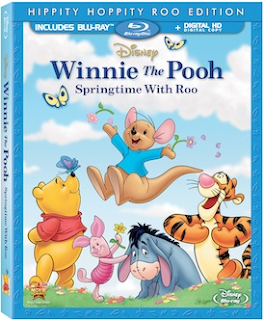 The storytelling continues in the Hundred Acre Wood with the all-new "WINNIE THE POOH: SPRINGTIME WITH ROO" full-length feature as it leaps for the first time on Digital High Definition and Blu-ray™ March 11, 2014! This edition comes with an enchanting never-before-seen bonus treat too.

Synopsis:
Each year, Rabbit plays Easter Bunny, but this year, he’s decided it’s “Spring Cleaning Day,” and he orders everyone to hop to it: scrubbing, dusting, and mopping. All his pals are disappointed – especially little Roo – until Rabbit learns that putting others first and showing friends how much you care turns every day into a precious gift. Sparkling with unforgettable songs and a never-before-seen bonus treat, this delightful “egg-stravaganza” shows why love, hope and friendship are always in full bloom in the Hundred Acre Wood!

Bonus Features:
GET UP AND DANCE!  Kids and Families can get into the spirit of Easter by dancing to Rabbit’s Easter song.

Love Winnie the Pooh and Roo too - this looks fun