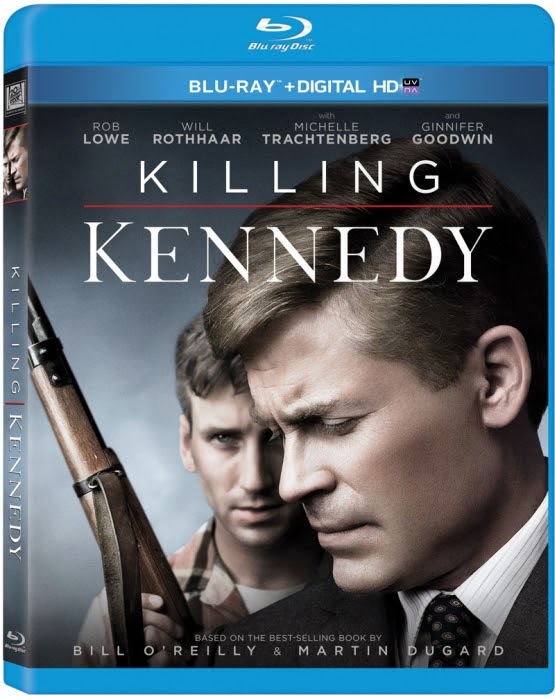 Based on the #1 Best-Selling Book by Bill O’Reilly and Martin Dugard, the Latest Installment of the Thrilling Trilogy Debuts on Blu-ray™ and DVD February 11


Showcasing a phenomenal cast including Rob Lowe as John F. Kennedy, Will Rothhaar as Lee Harvey Oswald, Michelle Trachtenberg as Marina Oswald, and Ginnifer Goodwin as Jackie Kennedy, KILLING KENNEDY is based on The New York Times best-selling novel. The film traces the chilling events leading up to the gunshot heard around the world: the assassination of President John F. Kennedy by Lee Harvey Oswald in Dallas in 1963. As John F. Kennedy (Lowe) rises to become U.S. president, a former Marine grows disillusioned with America. But when their paths ultimately cross, the course of history is changed forever in a chilling aftermath.


KILLING KENNEDY chronicles one of the most beloved United States Presidents, John F. Kennedy, and the shocking story of his assassination. The movie premiered on the National Geographic Channel and was seen by more than 3.4 million people, making it the most-watched broadcast in the network’s history. This epic journey is the second in a trilogy of books written by Bill O’Reilly and his researcher and partner Martin Dugard that have been adapted for the screen with National Geographic and Scott Free Productions. The first release in the trilogy was “Killing Lincoln,” a powerful display of the outrageous events surrounding the assassination of U.S. President Abraham Lincoln. The final instalment in the trilogy is “Killing Jesus,” which follows the events leading up to the crucifixion.


The KILLING KENNEDY Blu-ray™ and DVD are loaded with never-before-seen special features that go even deeper into the conspiracy that shook the nation including an extended feature; behind-the-scenes featurettes, as well as an exclusive interview with author Bill O’Reilly!