Disclosure:  This is a non compensated post!  Giveaway and all information provided by PartnersHub and VM. 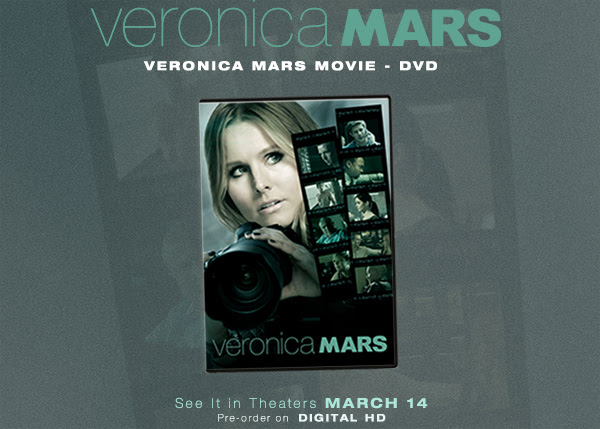 HOW THE FILM GOT MADE:
The fans wanted more!  Following a record-breaking Kickstarter campaign that ended on April 12, 2013, Veronica Mars was shot over 23 days during June-July 2013. It was released in selected theaters nationwide on March 14th, 2014.
Take the Veronica Mars: Purity Test Marshmallow Super-fan Trivia - Think you know all there is to know about Neptune, California? Test your Veronica Mars knowledge with all 3 levels of super-fan trivia and find out if you are the ultimate Marshmallow!

ABOUT VERONICA MARS KF:
On the eve of graduating law school, Veronica Mars has put Neptune and her amateur sleuthing days behind her. While interviewing at high-end New York law firms, Veronica Mars gets a call from her ex-boyfriend Logan who has been accused of murder. Veronica heads back to Neptune just to help Logan find an attorney, but when things don't seem right with how Logan's case is perceived and handled, Veronica finds herself being pulled back into a life she thought she had left behind.

We are giving one lucky reader A COPY OF THE VERONICA MARS DVD after it is released around May 2014!!


a Rafflecopter giveaway
By Shelly Leatham at March 15, 2014

I got: YOU’RE A MARSHMALLOW!
BUT NOT JUST ANY MARSHMALLOW, YOU’RE THE TOP! NOT EVERYONE KNOWS THEIR STUFF LIKE YOU DO.

I got Total Pirate BWallace1980(at)Hotmail(d0t)com

My quiz results were:

Level 1: Trip to the Dentist
Level 2: Call for Backup
Level 3: You're a Marshmallow

You took a trip to the dentist!


For level 1 I got Trip to the Dentist, Level 2 I got call for back up, and Level 3 I got You're a Marshallow. Thanks for the chance

Here are my results:

Total Triton! This is a great movie. Saw it at the midnight showing the night before it came out.

I got YOU TOOK A TRIP TO THE DENTIST!
IT LOOKS LIKE YOU MIGHT NEED TO BONE UP ON YOUR VERONICA MARS BEFORE SEEING THE MOVIE. MAY WE SUGGEST STARTING WITH A SEASON ONE MARATHON?

You took a trip to the dentist

IT LOOKS LIKE YOU MIGHT NEED TO BONE UP ON YOUR VERONICA MARS BEFORE SEEING THE MOVIE. MAY WE SUGGEST STARTING WITH A SEASON ONE MARATHON?
I took the trip to the dentist