The Birdcage - Coming to Blu-Ray on June 3rd

Disclosure:  No compensation was received for this post.  Birdcage is one of my favorite movies and I just wanted to share! 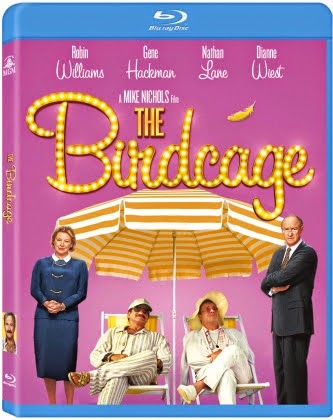 Anytime I need a good laugh, I know I can pop The Birdcage in the DVD player and my mood will improve!  I recently found out that the Birdcage is coming out on Blu-Ray on June 3rd and I am so excited.  My regular DVD copy is almost worn out!  Time for an upgrade!

Robin Williams and Nathan Lane are so wonderful together in this awesome comedy.  If you have not seen the movie, you need to check it out.  My family wholeheartedly recommends it!!


The Birdcage
Robin Williams and Nathan Lane team up with a top-notch cast in this hilarious comedy. Williams delivers an uproarious performance as Armand, a gay cabaret owner whose son announces he’s marrying the daughter of a right-wing politician (Gene Hackman). It’s an outrageously funny culture clash as Armand and his drag-queen partner Albert (Lane) try to transform themselves into straight shooters at a dinner party and pull the chiffon over the eyes of the uptight senator and his wife (Dianne Wiest).
By Shelly Leatham at June 01, 2014