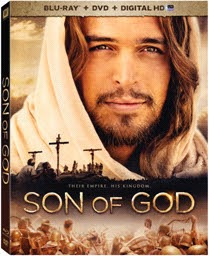 From award-winning producers Roma Downey and Mark Burnett and their LightWorkers Media, comes SON OF GOD, a major motion picture that brings the life of Jesus Christ to the screen like never before

Become a part of the phenomenon that captivated the nation! Off the heels of the three-time Emmy®-nominated* History Channel miniseries “The Bible,” visionary Executive Producers Roma Downey (Touched by an Angel) and Mark Burnett (The Voice, Shark Tank) are back to tell the most important chapter of the greatest story ever told - SON OF GOD - on Blu-ray™ and DVD June 3 and Digital HD™ May 6 from LightWorkers Media and Twentieth Century Fox Home Entertainment. After grossing more than $60 million in box office sales and earning a coveted “A” Cinemascore opening weekend, SON OF GOD comes home to entertain and inspire millions of families and communities across the globe.

"What an honor it has been to bring the story of the life of Jesus Christ to so many people," said executive producer Roma Downey and Mark Burnett. "Now families can bring the story into their homes and enjoy together."

SON OF GOD brings the story of Jesus' life to audiences through compelling cinematic story-telling that is both powerful and inspirational. Told with the scope and scale of an action epic, this film features powerful performances, exotic locales, dazzling visual effects and a rich orchestral score. SON OF GOD shows the life of Jesus from his humble birth through his teaching, crucifixion and ultimate resurrection.

When The Bible mini-series was shown on the History Channel, my family was glued to every episode.  It was wonderful.  When Son of God came out, I knew I wanted to see how the movie makers compiled the events to tell about the life of Jesus.  We follow Jesus from his birth in a stable in Bethlehem to his crucifixion at Golgatha and on to his resurrection.  As a Christian, this movie had a very powerful effect on me.  I have and do read the Bible, and watching the scenes unfold before me made me feel as though I was there.

I would recommend this movie to anyone who wants to learn more about Jesus.  The Son of God was not just any man.  He did not lead a completely normal life.  The movie is very powerful because it tells the Greatest Story Ever Told.  This is a true story.
By Shelly Leatham at August 07, 2014