Go Back to School with Delicious Soup from The Original Soupman

Back to School season signals the end of summer and the beginning of the cooler temperatures of fall.  It also signals the beginning of soup season!  Although NC does not really get good and cool until November or December, nothing beats a good, hot bowl of soup on a chilly afternoon or evening.  Soup brings lots of nutritional value to your meal, because soups are usually filling and also have energy density, which means less calories per gram than solid foods. 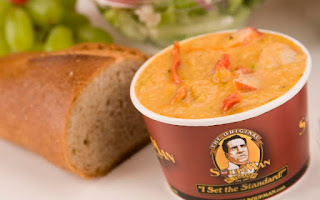 The Original SoupMan soup is cooked in small batches, with wholesome ingredients, and has no added MSG like other brands. The soup is NOT packed in cans. Instead, the soups are packaged in environmentally safe Tetra-Paks, so there are no harmful BPAs found in their packaging – and they are recyclable.

If you are like me, you remember the Soupman from Seinfield.  The Original Soupman has teamed up with actor Larry Thomas, the “Original Soupman” who infamously shouted the phrase “No Soup for You” on the iconic television series Seinfeld, to promote the Soupman brand across America.  How cool is that?  He will even be serving up soup occasionally at the landmark NYC store. 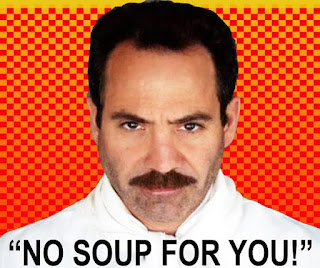 About Soupman, Inc.
In 1984, The Original SoupMan opened its doors at 55th Street & 8th Avenue in Manhattan and quickly became a worldwide destination. Rated #1 by Zagat and praised by the New York Times as "Art, not Soup," it set the standard for innovation and excellence long before the famous “Seinfeld” episode made it a cultural icon. We sell soup across America to in Tetra Pak cartons grocery stores next to Campbell’s and Progresso as well in our franchise restaurants, soupmobiles and foodservices.  Shaquille O'Neal is an advisor and equity partner, as are Mr. October, Reggie Jackson and the award-winning actor, Jason Alexander. Lloyd Sugarman, co-founder of Johnny Rockets Hamburgers, is our Chairman of the Board. Soupman Inc., is a fully reporting public company trading under the symbol SOUP. For additional information on the company please visit:www.originalsoupman.com Follow on Twitter @OriginalSoupMan and "Like" on Facebook.

What do you think?  Have you ever been to the restaurant or have you tried any of the soups?  Share your experiences!  I'd love to hear about it!

Email ThisBlogThis!Share to TwitterShare to FacebookShare to Pinterest
Labels: Back to School, delicious, fall, soup, The Original Soupman

Hahah I love that episode of Seinfeld - soup nazi

This is what I miss about NY. This is not available here.