Disclosure (in accordance with the FTC’s 16 CFR, Part 255: “Guides Concerning the Use of Endorsements and Testimonials in Advertising”): Many thanks to Propeller Consulting, LLC for providing this prize for the giveaway. Choice of winners and opinions are 100% my own and NOT influenced by monetary compensation. I did receive a sample of the product in exchange for this review and post. 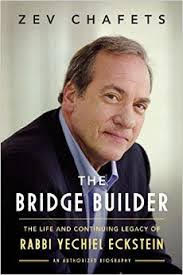 The Bridge Builder is the most recent book that I have been sent to review by FlyBy Promotions. This book tells the amazing story of Yechiel Eckstein, a Chicago-based orthodox rabbi who founded the world’s largest philanthropic organization of Evangelical Christians in support of Israel.  Rabbi Eckstein founded The International Fellowship of Christians and Jews in 1983 and it continues to go strong today.

Not sure what The International Fellowship of Christians and Jews is?
The International Fellowship of Christians and Jews was founded in 1983 by Rabbi Yechiel Eckstein to promote understanding between Jews and Christians and build broad support for Israel and other shared concerns.  Their ministry's vision is that Jews and Christians will reverse their 2,000-year history of discord and replace it with a relationship marked by dialogue, respect, and cooperation.  Among the many things they do as an organization, they also create materials for teaching about the significance of connecting Israel and Christianity through such resources as A Woman of Valor: Celebrating The Proverbs 31 Women In Our Lives, A Man Of Faith: Reflections On Godly Leadership From The Ancient Shepherds Of Israel (both devotionals by Rabbi Eckstein), and Seven Fruits of Israel: Recipes And Devotions From The Holy Land (by Yael Eckstein).


About the Book
When the Anti-Defamation League sent a young Rabbi Yechiel Eckstein to Chicago to foster interfaith relations in the late 1970’s, he was surprised to see how responsive Christian evangelicals were to the cause of supporting and defending Israel.

Eckstein founded The International Fellowship of Christians and Jews in 1983 to promote cross-cultural understanding and build broad support for Israel, Soviet Jewry, and other shared concerns. The Fellowship has grown and thrived over the last three decades, raising more than $1.1 billion, and is one of the largest 50 NGOs in America today. American Christians have become one of Israel’s most reliable sources of financial and moral support.

Few people realize that Eckstein and The Fellowship have done an unprecedented good deed in bridging an ancient cultural gap. Renowned journalist Zev Chafets explores Eckstein’s role in this important interfaith evolution, showing how an American rabbi made major progress in promoting dialogue, cooperation, and mutual respect in the face of harsh and unrelenting opposition.

My review:
This book is well written and it does tell you about Rabbi Eckstein and about all the money he has raised for The Fellowship.  He has been beneficial in establishing a better cross-cultural understanding between Jews and Christians.  As a born again Christian, I do believe that the children of Israel are God's chosen people, but I also know that they rejected that Jesus is the Messiah.  Because of that, Salvation was opened to the Gentiles.  I am one of those Gentiles!  I believe that Jesus was fully human, and that He is GOD.  I try to wrap my head around the differences in the ways my beliefs differ from Jewish people, and it is mind blowing.  BUT... I support Israel.  The book was good, but I did feel that it went over the same thing numerous times.  You will read about a lot of people and their thoughts on Christian-Jewish relations, how Rabbi Eckstein over came problems, and about the money he has raised.

If you would like a chance to read The Bridge Builder, by winning  a copy, simply enter on the rafflecopter form below.

I would like to win because I am interested in him as I believe that he runs the largest philanthropic organization for Christians to help Judaism.

I love that he bridged two worlds, Christians and Jews and they work together. I would love to read about the man who made that happen.

I would like to win to read about his views on the relationships between Judaism and Christianity.

I think Rabbi Eckstein is inspirational & I'd love to read his book.