Disclosure:  Sponsor is responsible for prize fulfillment!  No compensation is being received for posting this giveaway!

Do you watch Modern Family?  It is nominated for Six Emmy® Awards including Outstanding Comedy Series and Outstanding Casting For a Comedy Series!  Season 6 has just been released on DVD and Shelly's Bits & Pieces is giving away a copy! 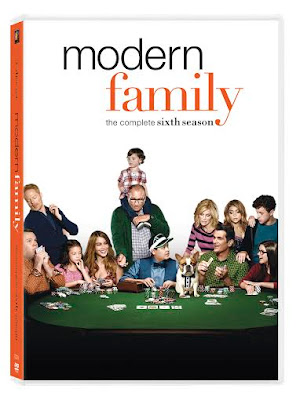 About "Modern Family” Season Six
The honeymoon is over, but the laughs continue in Season Six of “Modern Family,” winner of five consecutive Emmy® Awards for Outstanding Comedy Series. As freshly hitched Cam and Mitch acclimate to the realities of wedded bliss, Phil and Claire find their marriage stressed by annoying neighbors, Thanksgiving dinner gone awry and Claire’s online snooping. Meanwhile, a spy-camera drone wreaks havoc in Jay and Gloria’s backyard and a close call on the highway leads to amusing changes in various members of the Pritchett-Dunphy clan. It all adds up to the funniest season yet of this brilliant and acclaimed comedy

The DVD includes special features which include:

Nolan Gould, who plays "dumb" Luke Dunphy, has actually been a member of Mensa since he was 4.

Eric Stonestreet is a Kansas native who wanted to become a clown as a kid. In fact, his childhood invention of “Fizbo” the clown has now been resurrected on “Modern Family.”

Julie Bowen was 8 months pregnant with twins in the Modern Family pilot.

In early seasons, Jay kept forgetting that Mitchell was gay. This was added in after the producers heard Jesse Tyler Ferguson’s real experience with coming out to his father three times.

During the early seasons, Jay would constantly forget that his son Mitchell was gay. Jesse Tyler Ferguson, who plays Mitchell, says the idea came from his own real life experience since he had to come out to his real father three different times over a period of several years.

~~~Giveaway~~~
One lucky Shelly's Bits & Pieces reader will win their own copy of Modern Family Season 6!  Simply enter on the rafflecopter form below!

I do watch the show and I like Phil.

My family and I watch this show together. Our favorite charachter is Phil. Thanks for the giveaway. I hope that I win. BWallace1980(at)hotmail(d0t)com

I have never seen the show, I heard it was funny

I never miss an episode and I love Claire

I love modern family. I watch it all of the time. It is one of my favorite shows!

I like Claire and my family watches the show together.

I do not watch but this is my moms favorite show ad I would love to win it for her!

We love Modern Family in our house! Our favorite character is Jay Pritchett! Thanks so much for the opportunity to win!

I do and Phil is my favorite!
mcfallsk8er[at]aim[dot]com