Disclosure:  Product was received to facilitate our honest and unbiased review!  No monetary compensation was received! 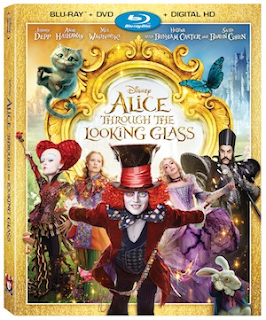 In “Alice Through the Looking Glass,” the all-star cast from the 2010 blockbuster is back with Johnny Depp as the Mad Hatter who’s desperately searching for his family; Anne Hathaway as Mirana, the kind, mild-mannered White Queen; Helena Bonham Carter as Iracebeth, the short-tempered, big-headed Red Queen; and Mia Wasikowska as Alice, the heroine at the heart of the story. Sacha Baron Cohen joins the ensemble as Time, a magical being that is part human, part clock, and the late Alan Rickman—to whom the film is dedicated—is the voice of Absolem, the blue Monarch butterfly who metamorphosed from the blue caterpillar “Alice in Wonderland.”

Our thoughts:  If you were a fan of Tim Burton's version of Alice in Wonderland, you will not be disappointed.  Johnny Depp continues the magic as the Mad Hatter and before you know it, you are sucked into his quest to find his family.  This movie was a pleasant distraction from the craziness of our day.  One caveat though...Princess Pickle did NOT like the Red Queen and had a nightmare about that big headed woman.