Happy Kwanzaa to My Friends who Celebrate! 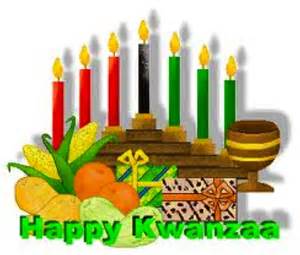 1. Kwanza will celebrate its 50th Birthday in 2016!
The holiday was created by Dr. Maulana Karenga in 1966 to celebrate family, culture and heritage, and is modeled after the first harvest celebrations in Africa.

2. The Number Seven
There are 7 Principles and 7 Primary Symbols that emphasize a unique set of values and ideals during the 7 days of Kwanzaa… also spelled with 7letters.

4. Red, Black and Green
The colors of Kwanzaa are a reflection of the Pan-African movementrepresenting “unity” for peoples of African descent worldwide: Black for the people, red for the noble blood that unites all people of African ancestry, and green for the rich land of Africa.

5. Stamp That!
The first US postage stamp to commemorate Kwanzaa was issued in 1997. There have been 4 designs released since then, the most recent being in 2013.

6. A Universal Message
Kwanzaa is rooted in African culture, however, people from all racial and ethnic backgrounds are welcomed to join in the celebration.

7. Star Power
Celebrities who have been known to celebrate Kwanzaa every year include Oprah, Maya Angelou, Chuck D, Angelina Jolie, and Synthia Saint James (who designed the first Kwanzaa postage stamp.)
By Shelly Leatham at December 26, 2016

I don't know anyone who celebrates Kwanzaa but it sounds like fun! Thanks for all the information. kristiedonelson(at)gmail(dot)com Thank you. Happy 2017!