What a week I have had!  Chefy and I have not had dental insurance since he got laid off from his previous job five years ago.  His new job does not offer dental insurance and their health policy is so expensive we cannot afford it.  So we have been without any insurance for 5 long years.  When Chefy went into the hospital last year with sepsis, the intake person at the hospital filed to see if we could get medicaid.  Because of his hospital bills, we were able to get it and we have it until March.  We were asked numerous times why we didn't get Obama Care, and the fact is, we could not come close to affording it.  What few people realized is that some states expanded their medicaid to take in the people who fell between the Obama Care guidelines and the normal medicaid standards.  Well, as much as I love my NC home, North Carolina decided NOT to expand their medicaid program, so we were out of luck.

Several years ago I was diagnosed with Sjogrens Syndrome and I was told that it could effect my gums and cause mouth sores and irritations.  It did!  Since we had no insurance, I could not get my teeth checked but when we started getting medicaid, my physician recommended that I go to the dentist.  (I had no idea that medicaid in NC covered dental visits!)  So, back in November, I went to the dentist.  I had one cavity which they filled and they told me that my Sjogrens was causing issues with my gums and that I needed to come back for a deep cleaning.  Medicaid approved it and I went on Tuesday.  They gave me 4 different shots of novocaine to numb the area then started.  The dental hygienist "pressure washed" my teeth then went back and used the pick to clean them.  Then she pressure washed some more, flossed, rinsed and then shot them with some air.  It took about an hour for this to occur.  This was only on ONE side of my mouth!  I had to go back on Wednesday to get the other side done. 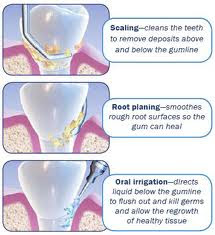 I must admit that Wednesday was a little worse than Tuesday, and I had more bleeding on Wednesday.  My mouth was sore for about a day with each, but it was not bad enough to require pain pills.  I took a Tylenol and felt better.  My teeth feel MUCH better, and so do my gums.  I am so happy I got this done.  In February, I go back to get a regular cleaning and they will recheck my gums to see how they are doing.

Have you ever had a deep cleaning on your teeth?  How do you feel about going to the dentist?  I'd love to know!!

Shelly, so sorry to hear about your ordeal. NC happens to be one of the worst states for dental care coverage/availability. I hope that you will be able to continue dental care. Here's a tip, dental schools charge patients significantly less money than dentists. Instead you pay in time, because the appointments last longer, but if cost is your barrier to care, then that could be something to consider in the future, especially for costly treatments. Good luck