Disclosure:  We received a free copy of this DVD to facilitate our honest and unbiased review.  All thoughts and opinions are those of the Shelly's Bits and Pieces Giveaway.  Please note that the sponsor is responsible for prize fulfillment. 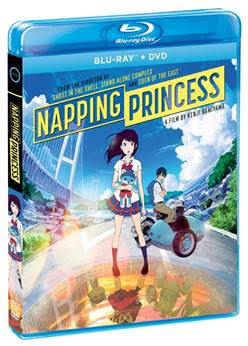 From visionary director Kenji Kamiyama (Ghost in the Shell: Stand Alone Complex and Eden of the East) comes a sci-fi fantasy that effortlessly weaves together the rapidly evolving technology of today’s world with the fantastic imagination of the next generation, which was nominated for Best Animated Feature – Independent, at this year’s Annie Awards.

The year is 2020, three days before the opening of the Tokyo Olympics. While she should be studying for her exams, Kokone Morikawa often dozes off, entering a dream-world called Heartland full of fantastic motorized contraptions. But when her father, a talented but mysterious mechanic, is kidnapped for stealing technology from a powerful corporation, it’s up to Kokone and her childhood friend Morio to save him. Together they realize that Kokone’s dream-world holds the answers to the mystery behind the stolen tech, uncovering a trail of clues to her father’s disappearance and ultimately a surprising revelation about Kokone’s family.

With an ambitious mix of multilayered action, whimsical characters and inventive machines, Napping Princess is a genre- and universe-blending film that shows that following your dreams is sometimes the best way to discover your past.

My kids have never watched any anime, so I was not sure exactly what to expect when we received Napping Princess to review.  The DVD is targeted to kids ages 9+, and when you watch it for a little while, you understand why.  The story is a complex one and you have to pay attention to follow it.  It goes back and forth between Kokone's dreamworld and reality until almost the end of the movie.  Our main kid viewers were a 9 year old male, 8 year old female, followed by a 13 year old female, 19 year old female, and me.  Since my kids were not familiar with the genre, it took them a few minutes to get used to the ways the characters looked and their clothes.  They had no real problems following the movie, and they liked the sci-fi aspect of it.  Our 13 year old guest seemed to enjoy the movie the most and she actually borrowed it to share with some of her 11-14 year old friends.

Are you interested in checking this movie out for yourself?  Do you like Anime, Sci-fi, or have an older child or teen who does?  Simply enter on the rafflecopter form below and you could win!  Two lucky Shelly's Bits and Pieces readers will be randomly chosen, from the rafflecopter entries!

a Rafflecopter giveaway
By Shelly Leatham at February 05, 2018

My daughter is super into anime at the moment.

my little niece wold love this I think

With my brother. He loves Kenji Kamiyama

I seen this giveaway on FB

I found out about the giveaway on Tight Wad in Utah blog giveaway link.

I would share this movie with my brother if I won. He loves Anime. Thanks for the giveaway. Bernie Wallace BWallace1980(at)hotmail(d0t)com

My niece would love this.

I found the giveaway here http://www.tightwadinutah.com

My kids and I love anime so I would watch with them.

I'm a big anime fan, and I've been introducing my 9-year-old niece to the medium. She loves Mamoru Hosoda films like The Boy and the Beast, Wolf Children and Summer Wars. Napping Princess sounds like it would be right up our ally, with its female lead and fantastical setting!

I would share this with my niece. My whole family loves anime!

If I won, I'd share this with the grandchildren. I am not sure if they have seen any anime yet.

If I won, I'd share this with the grandchildren. Not sure if they anime or not.

Both of my sons are anime fans. This would be for them :)

I would like to win this for my grandkids.

I would share this with the twins. We love the Studio Ghibli stuff.

Found your giveaway via Airplanes and Dragonflies.

This will be for my granddaughters.

I saw giveaway on Airplanes and Dragonflies

I learned about the giveaway on Airplanes and Dragonflies

I'd watch with my sweet granddaughter who is recouping from a bad car wreck. yes on Anime.

I'd love it for my kids.