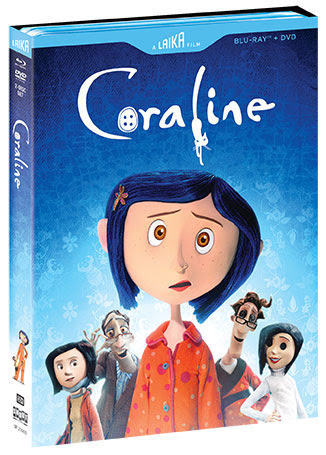 Additionally, Fathom Events, alongside LAIKA, Shout! Factory, and Park Circus, have announced that they are bringing fan favorites Coraline and ParaNorman back to theaters to celebrate the 15th anniversary of LAIKA Studios. The two titles will be presented in their entirety and will feature exclusive bonus content that reveals the unique creative process behind LAIKA’s extraordinary films.

Celebrating its 15th anniversary this year, LAIKA is known for blending trailblazing artistry with bleeding-edge filmmaking technology. In making the studio’s first feature, director Henry Selick and the team behind 2009’s Coraline brought the film to life with painstakingly handcrafted stop-motion, utilizing an innovative combination of new and existing technology creating a sense of timelessness and securing its place as a modern classic. It was the first stop motion film ever conceived and photographed in stereoscopic 3-D, creating a new and thrilling experience for viewers.

The studio continued to innovate with 2012’s ParaNorman, the first film to use full-color rapid prototype 3D printing of the puppet faces, pioneered by LAIKA. The supernatural comedy thriller about a young boy who can speak with the dead, ParaNorman was heralded by critics for its handling of complex and sometimes melancholy topics with a touching candor not often seen in family cinema. The supernatural comedy thriller directed by Sam Fell and Chris Butler was cheered by fans and extolled by many critics’ groups as the year’s best-animated feature.

The Boxtrolls, released in 2014 and directed by Anthony Stacchi and Graham Annable, continued LAIKA’s streak of innovation and attention to detail. Based on Alan Snow’s book Here Be Monsters!, the film featured several new feats of inventive filmmaking, including designing collapsible armatures that enabled the Boxtrolls to pop in and out of their boxes; constructing a giant, steampunk-inspired roaming “Mecha Drill,” and staging a complex choreographed ballroom dance scene that seamlessly integrated practical puppets and 3D-animated background dancers. The result was a charming and heartwarming film, a perfect fit for the studio’s canon.

A heroic adventure set in a mythical feudal Japan, 2016’s Kubo and the Two Strings is a tale of courage and the power of storytelling. Inspired by Japanese art and design to create the vibrant world that Kubo inhabits. The production team at LAIKA was led by studio President & CEO Travis Knight, who directed the film and animated several of the scenes.  To bring this breathtaking tale to life, the filmmakers created a 400 pound, 16-foot-high puppet (the largest ever created for a stop motion film), managed thousands of grains of sand for a shipwreck scene, and created more than 48 million possible facial expressions for the Kubo character alone. Kubo and the Two Strings won the BAFTA Award and became only the second animated feature in history to receive an Oscar® nomination for visual effects.

From Henry Selick (The Nightmare Before Christmas, James, and the Giant Peach)) and based on the novella of the same name by author Neil Gaiman (Sandman), Coraline is a wondrous, thrilling, fun and suspenseful adventure and the first stop motion animated film ever to be conceived and photographed in stereoscopic 3-D, unlike anything moviegoers had ever experienced before. A young girl walks through a secret door in her new home and discovers an alternate version of her life. On the surface, this parallel reality is eerily similar to her real-life – only much better. But when this wondrously off-kilter, fantastical adventure turns dangerous and her counterfeit parents try to keep her forever, Coraline must count on her resourcefulness, determination, and bravery to save her family and get back home.

This comedic fable unfolds in Cheesebridge, a posh Victorian-era town obsessed with wealth, class, and the stinkiest of fine cheeses. Beneath its charming cobblestone streets dwell the Boxtrolls, foul monsters who crawl out of the sewers at night and steal what the townspeople hold most dear: their children and their cheeses. At least, that’s the legend residents have always believed. In truth, the Boxtrolls are an underground cavern-dwelling community of quirky and lovable oddballs who wear recycled cardboard boxes the way turtles wear their shells. The Boxtrolls have raised an orphaned human boy, Eggs, since infancy as one of their dumpster-diving and mechanical junk-collecting own. When the Boxtrolls are targeted by villainous pest exterminator Archibald Snatcher, who is bent on eradicating them as his ticket to Cheesebridge society, the kindhearted band of tinkerers must turn to their adopted charge and adventurous rich girl Winnie to bridge two worlds amidst the winds of change – and cheese.

In the comedy thriller, a small town comes under siege by zombies. Who can it call? Only misunderstood local boy Norman, who is able to speak with the dead. In addition to the zombies, he’ll have to take on ghosts, witches, and, worst of all, grown-ups, to save his town from a centuries-old curse. But this young ghoul-whisperer bravely summons up all that makes a hero – courage and compassion – as he finds his paranormal activities pushed to their otherworldly limits.

Kubo and the Two Strings is an epic action-adventure set in a fantastical Japan. The film follows clever, kindhearted Kubo as he ekes out a humble living, telling stories to the people of his seaside town. But his relatively quiet existence is shattered when he accidentally summons a spirit from his past which storms down from the heavens to enforce an age-old vendetta. Now on the run, Kubo joins forces with Monkey and Beetle and sets out on a thrilling quest to save his family and solve the mystery of his fallen father, the greatest samurai warrior the world has ever known. With the help of his shamisen - a magical musical instrument - Kubo must battle gods and monsters, including the vengeful Moon King and the evil twin Sisters to unlock the secret of his legacy, reunite his family and fulfill his heroic destiny.

Fueled by the vision of its President & CEO Travis Knight, the animation studio LAIKA was founded in 2005. Located just outside of Portland, Oregon, LAIKA was awarded a Scientific and Technology Oscar® plaque in 2016 for its innovation in 3D printing. All of LAIKA’s five films: Coraline (2009), ParaNorman (2012), The Boxtrolls (2014), Kubo and the Two Strings (2016), and Missing Link (2019) were nominated for the Academy Award® for Outstanding Animated Feature. Kubo and the Two Strings also won the BAFTA Award for Best Animated Film and received an additional Oscar® nomination for Visual Effects. Missing Link was awarded the Golden Globe® as Best Animated Film. @laikastudios

Shout! Factory, LLC is a leading multi-platform media company devoted to film and TV distribution, development, and production, as well as the preservation and revitalization of the very best in pop-culture entertainment. Founded by Richard Foos, Bob Emmer, and Garson Foos in 2003, Shout! owns and manages a large portfolio of films, contemporary and classic TV series, animation, and documentaries. The company’s creative acquisition mandate has established it as a leading independent distributor, with partners and properties including GKIDS, Sesame Street, The Carol Burnett Show, The Johnny Carson Show, IFC Films, Stephen J. Cannell Productions, ITV Studios, Major League Baseball Productions, and many others. Shout! Factory Kids focuses on live-action and animated kids and family properties as well as anime, and the company releases films and television shows in other genres under the Scream Factory and Shout Select imprints. Shout! develops, acquires, and distributes new films via Shout! Studios owns and operates libraries including Mystery Science Theater 3000 (in partnership with creator Joel Hodgson) and the Roger Corman New Horizon Pictures Library, and operates the acclaimed streaming service Shout! Factory TV. Shout! Factory is based in Los Angeles, California. For more on Shout! Factory, visit shoutfactory.com.

A review and giveaway of this adorable movie will be coming next week.  Check it out on the big screen tomorrow!

I haven't seen these 4 movies yet, but today I got more interested by seeing information about these movies, and now I will watch these movies today your blog has nice information. I hope you will consider my point, I was looking for Write my coursework service. because this is my favorite service for coursework help in London and they always give help within my studies you can also contact him if you ever need help with your coursework.